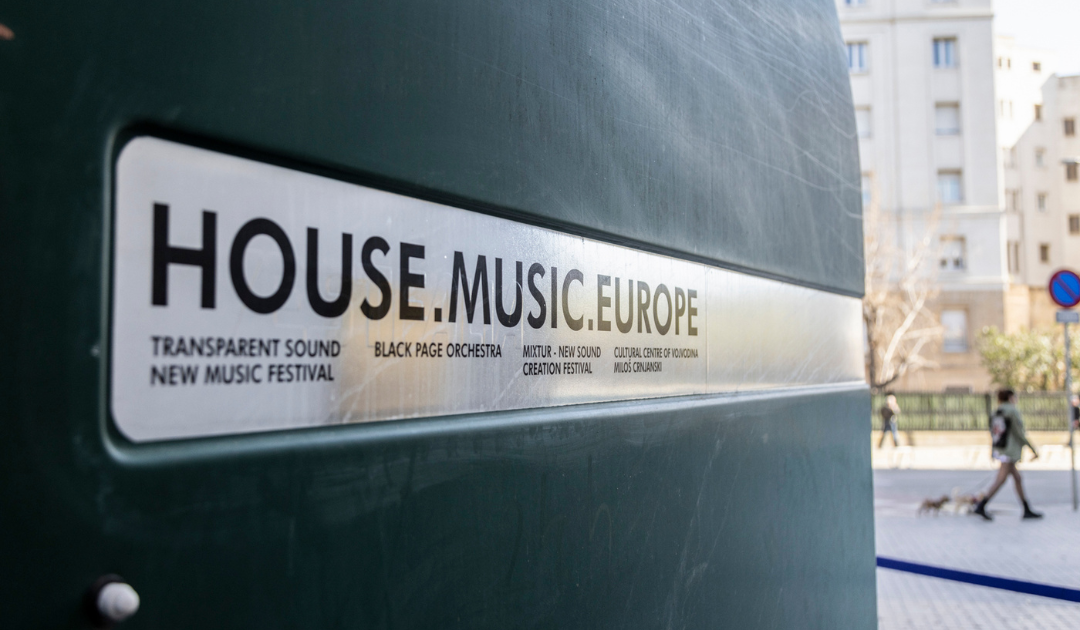 House.Music.Europe – HoME
An oral history based art-project created in cooperation of four European new music organizations in four countries: Hungary, Austria, Serbia and Spain. Our project combines music and other art forms as well as a social and technical research. It involves 12 young artists of different genres selected through an international call in order to create sonification algorhythms and further collective works based on the collected materials.
A three years long project phase is co-founded by the Creative Europe Programme of the European Union.

The Exhibition
The exhibition consists of four different installations developed collaboratively by the four teams of the HoME project during 2021-2022 (Austria, Hungary, Serbia and Spain).
Each installation reflects on the first phase of the EU project in which the four teams traveled to rural and urban areas in their countries with the HoME-house: a horse-trailer which was rebuilt as a portable interactive participatory structure whose purpose was to collect human spoken stories and turn them into musical sounds. With the HoME-house as a point of departure the artists engaged in a conversation with the local inhabitants, the people and their history and started a process of exchange on the topic of the meaning of the word home.
The collected stories and narratives have been transposed and recomposed into electronic sounds that we now call sonifications.
Sonifications capture the participants’ numerous stories and their interaction with the HoME-house itself – at times playful and at times very intimate.
In this exhibition the four teams explore and reflect on their experiences through different means, inviting the visitor into different approaches of storytelling: the meaning of oral history of the visited places and their people.

AUSTRIA
Mistranslations – memories of a vanishing lake
At the beginning of the project’s research phase, the artists Conny Zenk, Eva-Maria Schaller and Marco Döttlinger, developed questions connected to the region of Lake Neusiedl, in particular, Podersdorf am See, a rural area situated in Burgenland (Austria). Setting up a participatory sound installation that invited local residents to join in, they collected stories, sounds, impressions, and experiences that initiated a process of translating narratives into various forms of artistic processes. Focusing on the central topic of translation as a pivotal phenomenon for their own collaborative practice, the artists analyzed the sounds and synthesized fragments of rhythms as well as speech melodies of recorded voices in order to superimpose and elaborate on these sounds created in real time. Progressively shifting their focus of the work from the idea of interviewing people to interviewing the space and even the natural elements around them such as water or bodies, they designed this transdisciplinary art installation as an ever-changing conversation in the image of a transformative landscape made of sound, video, and choreography. The installation is devised as hybrid multimedia performative work.
What does the landscape around Lake Neusiedl sound like? What changes within the last years or decades can you remember? The acoustic feel, the soundscape that surrounds us, is also always an indicator of the state of a system.

HUNGARY
HoME – Corner
“The corner is a haven that ensures us one of the things we prize most highly — immobility. It is the sure place, the place next to my immobility.” Gaston Bachelard – The Poetics of Space
A space reflecting on the idea of ‘home’ as well as ‘integration’ and ‘connectedness’ with several vaguely connected elements that can create a complex intellectual and sensory experience.
The space contains the following objects:
A, closed glass-container of living and growing funghi and bacteria derived from the air of the exhibition space.
B, a microphone on a stand with short instruction on how to interact with it,
C, a stack of books with one on the top, that can be read out loud by the guests of the installation,
D, colored lights controlled by the frequency information of the voice of the guests,
E, loudspeakers connected to a real-time corpus-based concatenative synthesis, a compositional tool using several sound recordings by guests of the previous phase of the HoME project in the four countries and creating an echo of the spoken voice

SERBIA
by Jug Marković, composer
supported by Kulturni Centar Vojvodine “Miloš Crnjanski”
HoME Audio installation is an acousmatic electronic non durational installation for headphone listening. You are invited to sit down and join at any time, put a black medical mask over your eyes (as a blindfold), then put the headphones on and immerse into purely audio world made of human testimonies and stories.
What you will hear is made of real time electronic treatments of human speech made during 5-day HoME field trip in Serbia (April 2022). All the sounds were collected and created in three palces: Novi Bečej (25.04.2022) a small town in northern Serbia, Belanovica (27.04.2022) a village in central Serbia and city of Novi Sad (29.04.2022), second largest city in the country.
Majority of creation of sounds you will hear was done live (with real time manipulation of electronic processing) and is a result of live interaction with the visitors and their spoken testimonies. The “automation” of electronic processing was minimal and majority of the sonified results came from live interaction, live tweaking, real time playing and reacting to the speech of our numerous guests (several dozen people).
The original files created during the tour in Serbia were not significantly treated nor changed in post production but only carefully selected and arranged in a meaningful timeline. With all their flaws and particularities, they are a testimony of a several days long recording/sonification filed trip and interaction with local population.
This installation is a sort of an audio museum. It is supposed to show both the result of our work and to transpose the feeling of our very lively fieldwork process.

SPAIN
The concept of home in its broadest dimension, has been the starting point for the artistic work of Julio César Palacio, Carlos Nuñez Medina and Ricardo Castro Arceiz.
During the first phase of the project, different life stories were collected through a questionnaire carried out with citizens of Barcelona in the HoME-house. Two sites were established, one at the University of Barcelona and the other at the Santa Monica Art Centre.
Through the questionnaire, three main lines of interest were expressed that represented each of the artists. The first is related to the fact that few people in cities (especially young people) do not have a house, but instead share a flat and space. The second related to violence and the LGTBIQ movement and third related to collective memory.
From these three different and personal points of view, the artists propose three independent installations that address the issue of habitation and home.
Julio Cesar Palacio

Memory objects is an audio installation designed by composer Carlos Nuñez Medina that raises the issue of habitation through objects, sounds and stories. People are linked to objects and objects to people. There is an affective and emotional bond that joins people and objects. These objects are loaded with a social and cultural significance that provides the memory of lived experiences, establishing a link between past and present. The domestic world has objects that remain in the memory of generations. Objects whose value, meaning, function or sense has changed or disappeared with the passing of time, facing oblivion. In the installation Memory objects the viewer looks at different objects and experiences their sound reconstruction. Stories, objects and sounds come together to evoke that which is no longer there, but somehow remains in our memory.
Ricardo Castro